Wetland Products is a foundation that is committed to research and product development regarding crops that are able to grow in wetlands. We want to develop a market that stimulates the practical use of products made from wetland crops. Find out more about our different projects below! 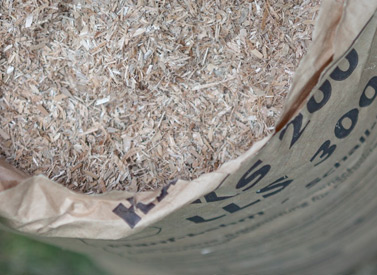 After buying a house in the rewetted peatlands near the Peene-river mouth in Northern Germany, the idea grew to insulate this future guesthouse with bio based materials. Internet research showed that fifteen years ago the Technical University of Munich together with the Fraunhofer institute of building physics and some private stakeholders, worked on the Donaumoos project. This project aimed to research cultivation, harvesting, machining and the potential use of cattail products in the building and insulation industry. In and around this project this resulted in stable insulation panels made of Typha leaves in combination with a mineral binding material. These panels have a high fire resistance (F90). Furthermore, cavity wall insulation was developed around the Donaumoos project. Although, these products were developed fifteen years ago, they are still not available on the open market. By willing to insulate the guesthouse, we needed accessible fields with Typha crops. Luck was on our side, because not far from the house we found wild grown Typha. However, in Germany it is not allowed to harvest a wild plant (Typha is not on the list of agricultural crops, and therefore a wild plant). Which means you need a special license for harvesting. In close cooperation with the University of Greifswald this license was obtained.

Today, our research is practically aimed on developing and testing the practical use of products of reed waste, Typha cavity and combined products of these two. Currently we are working on bio based Structural Insulation Panels. We are also working on standardized partition walls. These walls consist of Typha cavity on the inside and reed fibre panel on the outside. We now enter a stage where the products have to be tested thoroughly to obtain Life Cycle Assessment, CE - Construction products regulation and EPD. 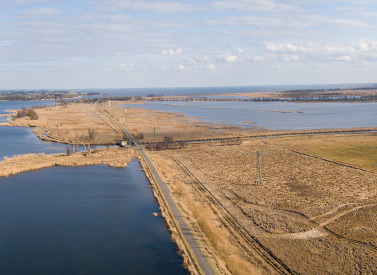 At first the aim was just to insulate the guesthouse with Typha and reed. On the way we found out that there is a huge interest in these products. Agriculture and building/construction are responsible for half of the CO2 emissions. If in agriculture reed and Typha are grown as crops on formally drained peatlands, agriculture can neutralize its own emissions. Thereby delivering projects to the construction sector who then can start thinking of CO2-free building.


Instead of just insulating the house, we will restore the house as a demonstration project. It will still be possible to see all used products in the construction when the housee is completely restored and in use. In the future it will be possible to visit the house to inform yourself about the used bio based products on regular open days and weekends. Currently we are looking for finance to equip the house with sensors on and inside the different walls. The ultimate goal of this is to make measurements real time accessible through internet. 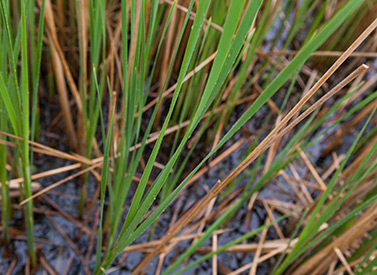 Heavy rainfall due to climate change nowadays causes pieces of land to get soaked to such an extent that their utility is reduced. Wetland Products has been pioneering with a sound solution to this problem.

Near Anklam, a city in North East Germany, we are allowed to harvest Typha. It grows on soil (peatland) that has previously been used for agricultural purposes. The soil is continuously rewetted through a leaking dyke, providing a layer of water. Ideally, Typha grows in 0-20 cm of water.

During our work in the field we became aware of the fact that there were plans to drain the area to facilitate the official tenant of the fields. To our surprise we found out that the costs of this drainage, which included digging a large ditch alongside the dyke, would be payed out of the fund for peatland restauration. So with money meant for peatland restauration, the region Mecklenburg-Vorpommern (MV) was planning to destroy the only existing Typha field in Germany and the Netherlands. The background to these strange moves was a trial where the user of the land was suing the region MV for harvest loss.

We found these developments so remarkable and confusing that we decided to contact the minister of Agriculture and Environment. As a result of the subsequent talks we will be facilitated by the region MV in the future to use these 8.5 hectares to prove Typha farming is sustainable and profitable in the long term. All in all, Wetland Products will be the first Typha farmer in North-Western Europe.